I don't suppose anyone knows excatly how many forgotten titles there are in publishers' Back Lists, but one thing is for sure, some of them would be really worth discovering by a new audience.  Here's a sample I have chosen to show you what I mean... 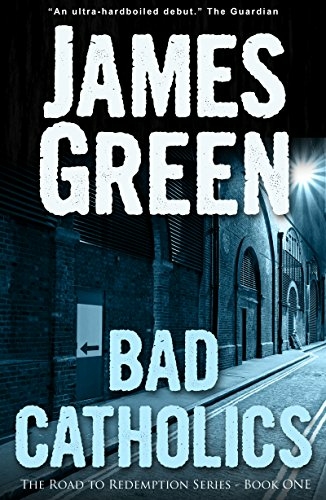 Meet Jimmy Costello. Quiet, respectable, God-fearing family man? Or thuggish street-fighter with a past full of dark secrets? Perhaps the answer is somewhere in between . . .

After Jimmy's wife dies the conflict inside him is too much and the violent assault he commits on a gangster forces him to leave London and his job as a detective sergeant and disappear for a while. Now he's back, on what you might call a divine mission . . . and to settle a few old scores too.

Through the eyes of his hard-boiled ex-cop, James Green takes us on a thrilling journey from 1960s Kilburn, through war-torn 1970s Africa to the streets of a London that seems to have cleaned up its act . . . until you scratch the surface.

‘People never cease to amaze me,’ said Sister Philomena.
‘Really?’
She laughed and continued in her thick Irish accent, ‘Not you, Jimmy, you don’t amaze me.’
‘Is that a compliment or an insult, Sister?’
‘A compliment if you’re humble and an insult if you’re proud.’
‘I’ll think about that. Where do you want this box of paper towels?’
She pointed down the harshly lit, institutional green corridor which ran between the staircase and the dining room.
‘Down there, in the cupboard under the stairs.’ They walked to the cupboard.
‘No, it’s Lucy Amhurst who amazes me. It’s not just that she gives her time in helping out here, it’s that she’s so good with the clients. She has no training or background in care or social work, yet she seems to know just what to say and do for them.’
‘It’s a knack, some people have it.’
‘It’s a gift. Here, I’ll open the door. Put them on that shelf.’
Jimmy put the box on a shelf and closed the cupboard door.
‘What now?’
‘The toilets.’
‘Again!’
‘Sorry, but let those toilets go for a minute and we’d need to divert the Thames to get them clean again.’
Jimmy moved away to collect the necessary equipment. One bucket and one mop was never enough. Philomena’s voice followed him.
‘And plenty of Jeyes Fluid, plenty of that. I only want to get the smell of Jeyes Fluid when I walk past those toilets, that and nothing else.’
Bartimaeus House was a day centre run by the Sisters of St Zita. In a more-than-usually run down part of Paddington, it was a shabby, three-storey property, its main door halfway down a grim cul-de-sac. It had been many things in its history before being donated to the Sisters by its last owner, whose generosity had been amply rewarded by the tax benefits he had obtained on the gift. Known locally as Bart’s, it had become an established feature of the neighbourhood. A welcome waited there for everyone who came through the doors. Addicts, homeless, battered women, the abused, the mentally unbalanced, all were offered warmth, safety, food, clothes, and washing facilities. There was always someone to listen if they wanted to talk and medical help and a bed for the night could be found if required. Local residents also came during the day for companionship and coffee. Many were elderly people who survived alone and forgotten. At Bartimaeus House they found a place where they felt cared for and listened to. However, Philomena had been told that the enterprise would have to be self-financing after ten years, a target she sometimes despaired of achieving. If she failed, Bart’s would have to close.

The group of three girls ran to where Jimmy was standing in the playground. They formed a line in front of him and chanted: