God is in the detail.

As sculpture soared to new heights in Renaissance Italy, northern Europe was having a creative surge of its own, filling its churches with spectacular, incredibly intricate works carved in limewood. 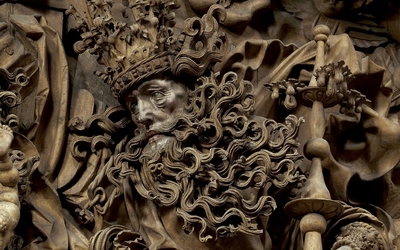 In Renaissance Italy, sculptures were fashioned from gold, silver, bronze, clay — no surprises there — but also such transient substances as sugar (figurines fashioned to decorate grand banquets, which have naturally not lasted so well). A few hundred kilometres farther north, in what is now southern Germany, the grandest altarpieces were carved from the wood of the lime tree, especially the sommerlinde, Tilia platyphyllos.
Now, you might think this was not a material to last half a millennium. And indeed, in other climates it might not have. It has been pointed out that the vast majority of the artworks of Africa, dating back over many centuries, have been eaten by termites. A similar fate has befallen limewood sculpture. 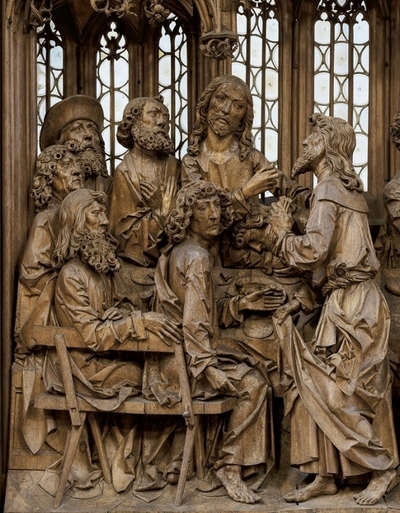 The Altarpiece of the Holy Blood by Tilman Riemenschneider, at Rothenburg ob der Tauber. Photograph by Achim Bunz

If you step close to the figures of Christ and his disciples in the scene of the Last Supper, central to Tilman Riemenschneider’s Altarpiece of the Holy Blood (1499-1505, above) in the St Jakobskirche in the town of Rothenburg ob der Tauber, you notice that their faces and robes are pitted with little holes. Woodworm have been burrowing into this, one of the finest of all German sculptures. Elsewhere, insects have consumed whole Madonnas and saints.
Other works have suffered other accidents. Veit Stoss’s Annunciation of the Rosary (1517-18) hangs from the vault of the St Lorenzkirche in Nuremberg like the most marvellous Christmas decoration in the world: a ring of roses, some five metres high, with the beads of a giant rosary around it. God the Father is at the top, and within the circle are the over-lifesize figures of the Madonna, Gabriel and smaller fluttering angels, surrounded by nothing but air.
The wood for those large sculptures came from a mighty lime, felled in the forest of St Sebald on 12 March 1517, as we know from the patron’s account book. Limewood — softer, closer-grained and less liable to warp than oak or walnut — was highly prized. One day in 1817, however, Stoss’s magnum opus crashed to the floor and shattered into fragments. Fortunately, in that epoch, the extraordinary filigree confection was valued sufficiently for it to be carefully put back together. In earlier times, many works were deliberately destroyed by iconoclasts, or just thrown away as out of date.

The experience of standing in front of Riemenschneider’s altarpieces at Creglingen and Rothenburg is as powerful as any offered by Ghiberti, Donatello or Verrocchio

Nonetheless, a surprising amount of limewood sculpture survives, most of it in the German-speaking world, and a good deal in the churches for which it was originally made. In some cases — such as the great works by Stoss and Tilman Riemenschneider described above — they remain in exactly the position for which they were intended, and can be seen from the same angles and in the same lighting conditions as 500 years ago.

The lavishly illustrated book Carved Altarpieces: Masterpieces of the Late Gothic (2006) lists no fewer than 22 elaborate wooden polyptychs that are still in situ, and those are just the crème de la crème.

They are works more jagged and curvilinear, and sometimes wilder, than those of the Florentine Renaissance — but just as worthy of attention. Indeed, Neil MacGregor argues that Tilman Riemenschneider is ‘comparable to Donatello in the intensity and subtlety with which he explores the spiritual’. And, one might add, in sheer artistic pizzazz. The experience of standing in front of Riemenschneider’s altarpieces at Creglingen and Rothenburg — or indeed Stoss’s work at Kraków and Master H. L.’s at Breisach — is as powerful as any offered by Ghiberti, Donatello or Verrocchio. 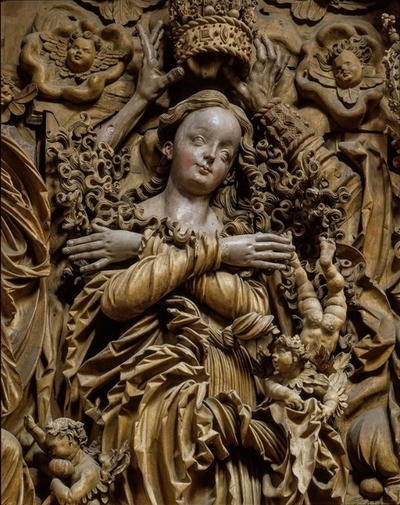 Detail of the figure of the Virgin Mary, sculpted by Master H. L., in the central panel of the altarpiece at Stephansmünster in Breisach, Germany. Photograph by Achim Bunz.

The limewood sculptures are spread over a wide area of southern central Europe. The farthest east are in modern-day Poland and the Czech Republic, the southernmost at Bolzano in Italy. Half a millennium ago, all these places — and also Alsace — were part of a wider German-speaking world. But the heartland of Renaissance limewood sculpture lay in the modern German states of Bavaria and Baden-Württemberg. For those in search of out-of-the-way art as rewarding as any in Tuscany or Umbria, these are the places to go.
I’ve been on several such excursions myself, most recently to Breisach, which is, quite literally, at the end of the line. When you step out at the station there, you see only buffers and grass-covered track stretching beyond. A little farther on lies the River Rhine, and on the other side of that, France. To get to Breisach you take a slow, local train from Freiburg in the Black Forest, where the great medieval Münster also has a number of carved wooden altarpieces, and a tremendous painted one by Dürer’s eccentric pupil, Hans Baldung Grien.

The full altarpiece by Master H. L., at Stephansmünster in Breisach, Germany. Photograph by Achim Bunz.

None of these, however, is quite so stunning, nor so bizarrely, weirdly fantastic, as the retable of Breisach, above. The subject of the main scene is ostensibly the Coronation of the Virgin, but at first you are aware mainly of twirling and flying forms. There is a mass of crinkled drapery, curving in space and clouds, apparently solid and alive with miniature cherubs, like toddlers playing on a rocky beach.
Three figures stand out: God the Father, the Madonna, and the Son. Of these three, the most extraordinary is God (main image, top), who wears a massive crown and holds an orb and sceptre, just like the Habsburg Holy Roman Emperor. But the most amazing thing about him is his beard, a supernaturally curly affair of independent strands, flickering sideways and upwards like flames, writhing like serpents. 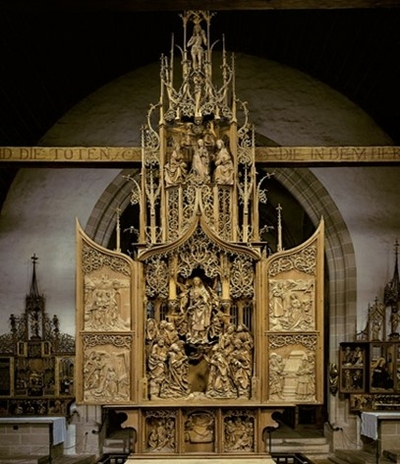 The Virgin Mary’s altar by Tilman Riemenschneider in the Herrgottskirche, Creglingen. Photograph by Achim Bunz.

In the north there was no equivalent of Giorgio Vasari’s Lives of the Artists, no contemporary chronicler to note down anecdotes about their characters and adventures.
The best-documented of the limewood sculptors was Veit Stoss of Nuremberg (circa 1450-1533). Stoss had as wandering and successful a career as any of his Italian contemporaries. In 1477 he moved to Kraków in Poland, where he ran a big workshop and made the largest of all limewood altars for the church of St Mary, which with its crowning tracery of crockets and finials, multiple scenes, innumerable reliefs and statues, stands some 14 metres high. He died, well into his eighties, leaving a fortune of 8,000 florins — a great deal for an artist (much more, for example, than the life savings of Leonardo da Vinci). 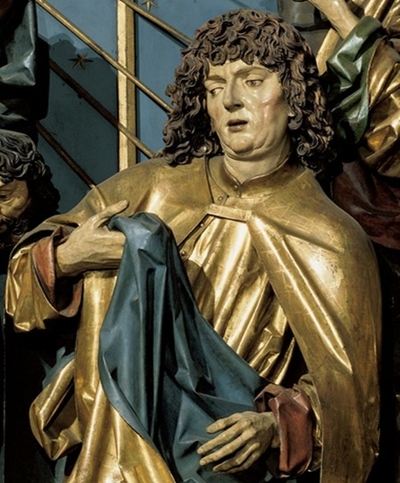 A figure from Veit Stoss’s altarpiece at St Mary’s in Kraków. Photograph by Achim Bunz.

Some of these sculptures are intensely real in a way that seems to anticipate such contemporary artists as Ron Mueck, Maurizio Cattelan and Jeff Koons

Tilman Riemenschneider (circa 1460–1531) was also a highly successful entrepreneur, running a very large workshop in Würzburg that turned out around 140 altarpieces. He rose to become mayor of the city and had the misfortune of being on the town council at the time of the Peasants’ War in 1525. The councillors, Riemenschneider among them, backed the wrong side, and were subsequently imprisoned and tortured.
It has been imagined by romantic historians that this unpleasant experience explained why Riemenschneider did little more work after his release. In fact, the vogue for elaborate altarpieces had come to an end. Master H. L.’s fantasia in Breisach, dated 1526, was the last of the line.
This was the moment of the Reformation — a profound shift in religious belief. Even in areas that remained Catholic, there was little demand for images that placed the sacred and the saints so compellingly before the eyes of the faithful. But that very living quality is one of the things that now makes these works seem oddly contemporary. Some were originally covered with polychrome painting, rendering them intensely real in a way that seems to anticipate such contemporary artists as Ron Mueck, Maurizio Cattelan and Jeff Koons. It is not hard to see why Koons is a collector of limewood sculpture.
Wood itself is a material that has returned to avant-garde sculpture in recent decades, in the work of artists such as Giuseppe Penone and Richard Deacon. The latter told me he had been on an expedition into rural Germany to look at limewood carvings.
Some carvings from the late 15th and early 16th century, particularly by Riemenschneider, were not painted in living colours but treated only with honey-hued varnish that left them looking beautifully, well, woody. Quite why this was done has been much debated.
My guess — and it is just a guess — is that it was a result of the distant influence of the Italian masters, who left their bronze and marble figures unadorned. The Germans did the same with their most prized material, the wood of the linden tree.
Germany is a land of forests. This is one of the attractions of seeing the works in their original locations. Breisach, for example, is on the fringes of the Black Forest, and the altarpiece there seems to have grown from the surrounding landscape. The curlicues and crockets of its frame twist like the fronds of a leafy sapling.